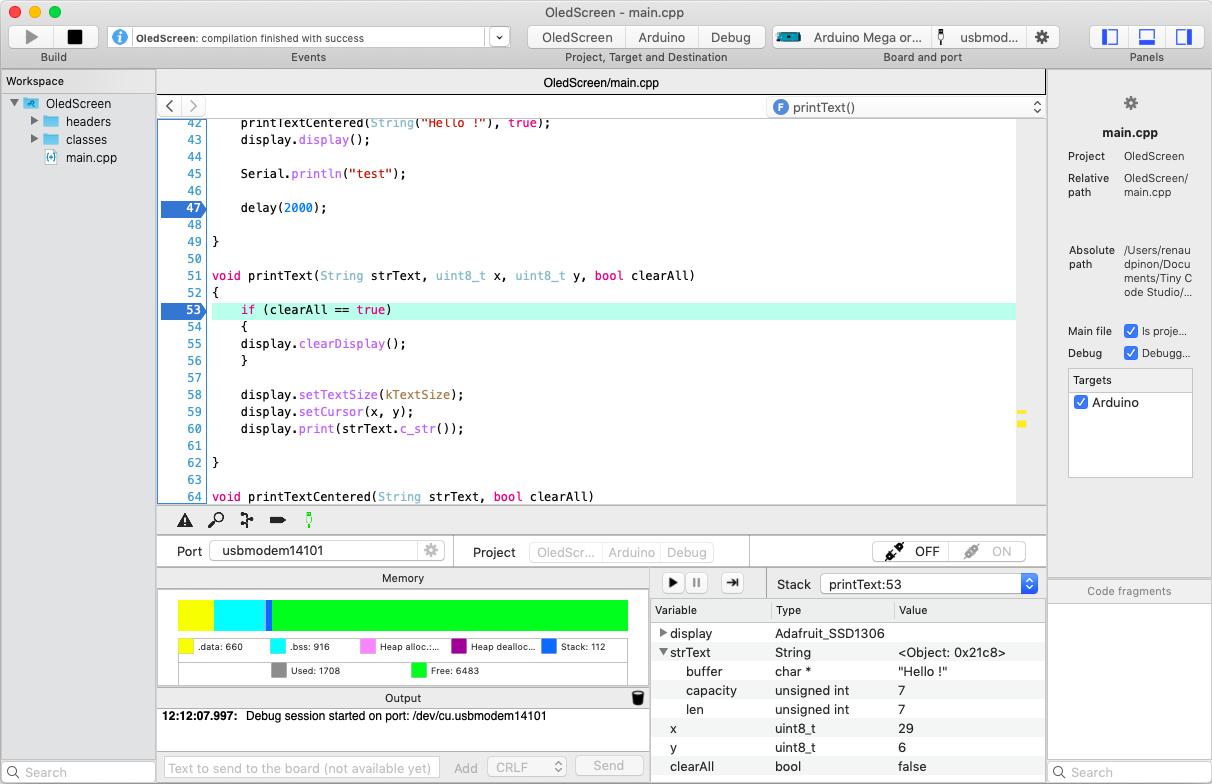 Errors and warnings are presented to you as you type the code.

Get propositions for your code as you type in.

Check the I/O pins status when a breakpoint is reached.

Check the EEPROM's content when a breakpoint is reached.

Manage the files in your project.
Each workspace can contain multiple projects.

A word on the Beta

Hello ! I'm the sole developper of Tiny Code Studio and I wanted to speak directly to you and be totally transparent. Tiny Code Studio allows you to develop programs for your Arduino boards and is in Beta for now (MacOs only, Windows version will follow later): it's not complete, not stable, not optimized and may very well make you lost your work. It simply means: don't forget to backup your projects from time to time and everything should be OK ;) To keep track of the progress until the release of the commercial version, you can check the bugs list.

Still, it's totally usable and a hell of an improvement for those of you who still use Serial.println() to debug ! Plus, it's totally free for now. On that note, I wanted to make some clarifications: there will be a commercial version of Tiny Code Studio after the Beta. I still not have fixed the price but I really like the 30$ (USD) target. I think it's fair and not too expensive so anyone can at least consider to buy it.

But there's still a ton of things to do before that: fix current bugs, allow import of Arduino IDE projects, add unit testing, add support for other boards than Arduino, add debugging using another Arduino as a bridge to free the Serial port, ... For now, if you want to support my work and make Tiny Code Studio even better, you can make a donation. Each amount is appreciated but know that a donation of at least 15$ (USD) will get you a free copy of Tiny Code Studio's commercial version when it will be out ! It's a sort of early access if you want :)

Thanks for reading and I hope you'll enjoy Tiny Code Studio ;)

Here are some frequently asked questions about Tiny Code Studio.

If you want to report a bug, you can use the form here.

This site doesn't store any information on your computer except for the session cookie (wich allows the server to identify you when you navigate between pages) and the Google Analytics cookie.

Two forms on this site requires you to input your name and your e-mail : it's only used to contact you if I need further details concerning your message. These informations will never be used commercially.

Google Analytics is only used to get the visitors number. It has been configured in order to: